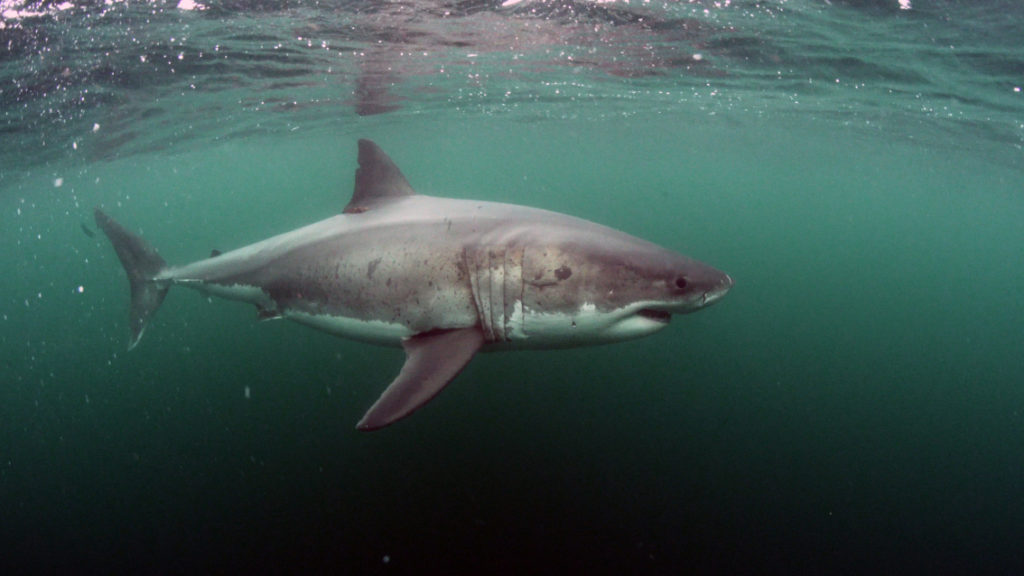 I wake ten minutes before my alarm goes off – and my body and mind instinctively know that I have an epic day in store. I skip my normal morning adrenaline run and drive to Malibu Pier, arriving at 7:45 a.m. sharp, knowing that the coming hours will peak my endorphins. Waiting to greet a great white shark is not an everyday occurrence, after all.

By 10:30 a.m. the land-based team is getting restless. We’ve heard that the floor of the ocean net pen, home to the white shark for the past several days, is being lifted by our boat crew and dive team. That means the white shark should be arriving soon, but there is still no “chicken in the coop.” I bite my nails as the minutes pass until finally, at 11:11 a.m., we get the call: “The shark is on board!”

Rushing to meet the shark

Whew! Everyone flies into action. The shark’s transport trough – the vehicle that will carry him down the pier, from boat to transport truck – is filled with salt water while the oxygen level is regularly monitored. The team walks briskly down the pier scanning the water for our boat, the Lucile, as two- to four-foot swells build on what had been a calm sea. All reports are that the swell will only grow in intensity for the next several days.

This is not welcome news.

When it’s two miles off shore, we spot the boat racing toward the pier. It’s essential that the crew time the operation when there’s a lull in the southern swells, so people and shark can safely get ashore. Fisherman and passersby gather to catch a glimpse of the action. On the far side of the pier dozens of surfers are hollering and inviting the waves to grow larger. Meanwhile the white shark team is muttering incantations to King Poseidon to pacify the great Pacific, even if only for a few moments, so they can get the shark on land.

The team times the swells

The team senses a lull. “Here we go,” yells Joe Welsh, our associated husbandry curator who’s at the helm of the Lucile. I can feel everyone’s heart rate increase. The adrenaline is flowing and transport team coordinator Scott Reid leans over the boat while Manny Ezcurra, our lead shark curator, hands him one end of the stretcher that’s holding the shark. Manny jumps onto the landing, and takes the other end. Water is flowing out of the stretcher as the two navigate their way up a flight of wooden stairs to the mobile trough, holding protectively onto their precious package. The young male great white shark is raised in the air, reminiscent of a baby being baptized, and gingerly lowered into the trough.

I do what I’m told, waiting for my next order.

“The button, the button -– go hit the button at the crosswalk!”Malibu pier

As the team rolls trough and shark down the long wooden pier, I sprint to where it meets the Pacific Coast Highway, my mind absent of everything except getting the young shark across the street safely and quickly. I hit the button, once, twice…impatiently, five more times… in hopes of getting a quicker response from the mechanically programmed light.

“Bobby!” I yell across the highway to our transport truck driver. “Hit the button!”

“I already did!” he hollers back.

As I look behind me, I see our veterinarian, Dr. Mike Murray, and a couple of white shark biologists sprinting to catch up with the shark. They reach us, out of breath. Waiting for a green light has never felt so infinite, but at last it comes. We look left, then right, before racing across the highway; dozens of cars and even more eyes looking at this motley group pushing a wooden box across America’s most scenic highway, in the heart of Malibu in the middle of summer. I’m curious what they think of it all.

I watch our team of aquarists, curators; truck driver and veterinarian merge as a well-oiled machine. As they reach the transport vehicle, two men grab the ends of the gurney and hoist the great white shark up the large stairs in a stretcher while another opens the lid on the 3,200-gallon mobile life support transport tank (also known as the finabago) that will hold the shark for the drive north up to Monterey. The sling is pushed down into the water and the four-foot, seven-inch male shark swims in smoothly and freely, ready to explore his temporary habitat.

Now it’s essential that Dr. Mike, the aquarium’s veterinarian, is confident that the shark’s swimming pattern is consistent and relaxed before the team is cleared to drives him north. As a smile creeps across the doc’s face I hear myself take a deep breath. I’ve been unconsciously holding my breath since we crossed the highway. Dr. Mike’s face tells me everything I need to know without having to look through the finabago’s window myself.

“You want a peek?” he asks. Coolly but quickly I walk to the window and lift the heavy white lid.
As the day’s adrenaline starts to leave my body I peer into a blue pool of clear water. In a moment, I’m eye-to-eye with the king of the ocean (well, at this size, maybe a prince).

“You are safe,” I whisper. “In a few months you’ll be released back into your wild habitat. Until then you’ll inspire tens of thousands of humans to protect you and your brethren.” He circles past me, his majestic, prehistoric and predatorial eye grazing past mine.

“Thank you,” I think deeply as I close the window and head toward the car.

“Time to go home,” I hear from behind me.

The truck heads north, Bobby at the wheel, Manny and Dr. Mike aboard to monitor the shark during the six-and-a-half hour drive.